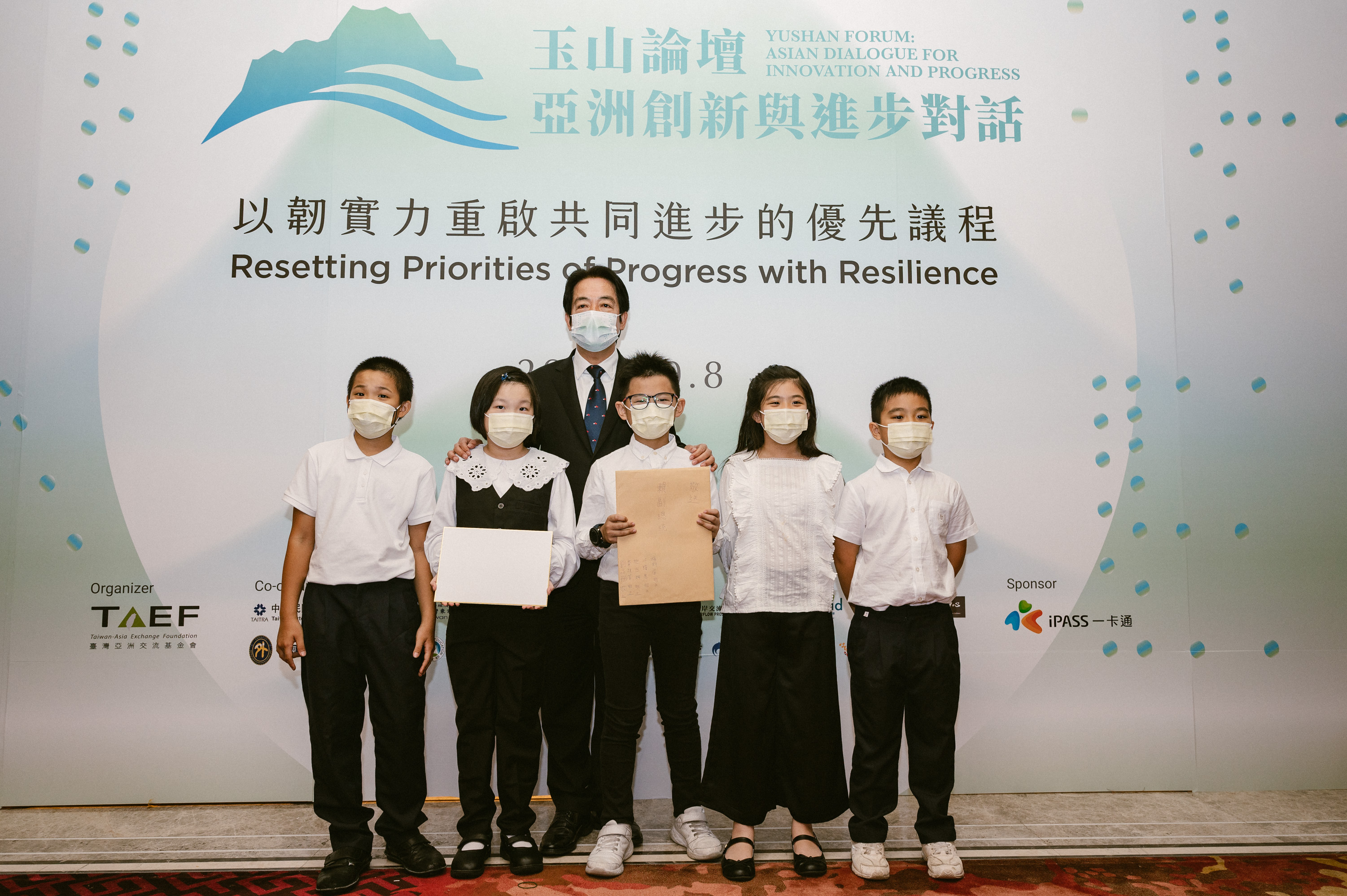 On the 8th, the Taiwan-Asia Exchange Foundation joined hands with government ministries and non-governmental organizations to host the fifth annual Yushan Forum, focusing on the next stage of development in Asia.

Vice President Lai Ching-te attended the Roundtable Dialogue: Resetting Priorities of Progress with Resilience" held in the afternoon at the Forum. He gave a speech emphasizing that Taiwan is a force of good for deepening cooperation in the Indo-Pacific. The Vice-President stated that Taiwan is willing and able to build a more resilient Asia and assume more international responsibilities. In addition, he called on like-minded countries to work with Taiwan to safeguard peace in Asia to ensure democratic values and regional co-prosperity. At the end of the speech, the Vice-President emphasized: "In the face of China's threat, democracy cannot be compromised, and we do not seek nor fear war. However, if our democracy and our way of life come under stress, we will do whatever is necessary to defend ourselves."

After the speech, Vice President Lai had a warm interaction with students outside the venue. Several elementary school students who were concerned about the issue of migrant workers handed out a letter when the Vice-President walked out of the forum, hoping to speak out for the Southeast Asian migrant workers in Taiwan. The children felt deeply that Taiwanese society was greatly affected by the epidemic. Due to various restrictions, many migrants could not return to their home country to care for their families. This group of students hope to do their best to peak the public's attention to the needs of these Southeast Asian migrant workers, who in return help support economic development and family care. This moment displays the core spirit of the New Southbound Policy, "people-centered." After receiving the letter from the students, the vice president encouraged these children to pursue their dreams and keep working hard. The Taiwan-Asia Exchange Foundation looks forward to helping the new generation and teams interested in devoting themselves in Southeast Asia and South Asia to implement meaningful initiatives and activities.

This year's "Roundtable Dialogue" was hosted by Dr. Michael Hsiao, Chairman of the Taiwan-Asia Exchange Foundation, and invited the New Southbound and international leaders to discuss urgent issues such as resilient cooperation, global governance, and regional security, and hoped to put forward the priority principles of resilient partnerships. Chairman Hsiao echoed off words mentioned by the Vice President that public health recovery, economic recovery, and democratic recovery will be the three primary work policies in the post-epidemic era.

In addition, the 2021 Yushan Forum held a session on "Rebuilding Wellbeing, Reinforcing Resilience," co-hosted by Taiwan-Asia Exchange Foundation Executive Director Dr. Alan Yang and visiting scholar Sana Hashmi. This session first invited Do Thi Thuy Huong, Executive Board Member of Vietnam Electronic Industries Association and Vice President of the Vietnam Association for Supporting Industries, to analyze the development trajectory of Southeast Asia from the perspective of changes in the global supply chain during the epidemic.

In order to accentuate the important achievements of the New Southbound Policy in cultivating the non-governmental exchange network, Manjeet Kripalani, the Executive Director of the Gateway House: Indian Council on Global Relations, was invited to speak in this session. In addition, Nashin Mahtani, Director of the Yayasan Peta Bencana Indonesia (Disaster Map Foundation), Zara Stanhope, Director of Govett-Brewster Art Gallery | Len Lye Centre, New Zealand, Rebea Brauer Country Representative for Japan at the Konrad-Adenauer-Foundation, and Lai I-Chung, President of the Prospect Foundation all also participated in the discussion.